Finish Your Beer when Jack Says 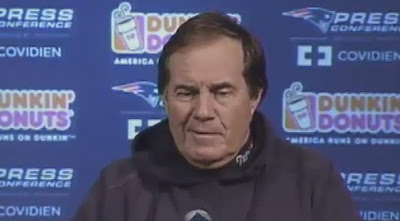 The media may think he’s a bore, but this is hallarious. Especially when it’s been asked and answered so many times that you already know what he’s going to say:

Q: I know you enjoy talking about injuries, so I’ll ask about one.

Q: What is Mike Wright going through in terms of dealing with the concussion?

BB: He goes through whatever the trainers do with him. I don’t know; I’m not a trainer. We have injuries. The trainers treat the injuries based on the symptoms and what the treatment is and how all that works and what the process is. That’s what medical people do.

Q: Glad we could end on a high note.

BB: Yep. Thanks for asking that.

During Randy Moss’ tenure with the New England Patriots, he scored 50 touchdowns, was part of a legendary 18-1 team, and went 0-1 in Super Bowls, bringing the Patriot’s Super Bowl Record down to 3-2. Above 500, but not the 4-1 we were looking for.

I picked Randy Moss early in both my Fantasy Football leagues this year because I was planning on him being traded to the Minnesota Vikings. Brett Farve simply has been in the league far too long to never have the opportunity to throw to #84 (or #81, or whatever his new number is).

The fact of the matter is that Moss was the proverbial Turd in the Punch Bowl here in New England. As a captain, he failed to motivate the players around him. For a guy with so much raw talent, the only thing that keeps him playing on the field is making catches — which, all too often, he is unable to do with his butterfingers.

That being said, he’s a hall of fame receiver, I’m a true fan, his press conferences are pure gold, and I have a lot more respect for him after this compilation by DJ Steve Porter.